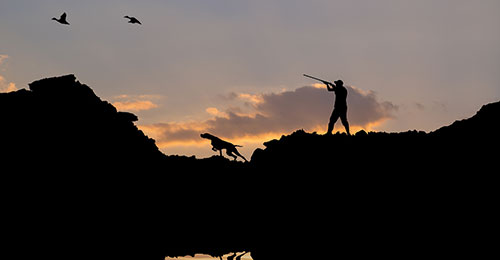 Lead has been commonly used in ammunition for hunting and sports shooting and in fishing tackle for centuries. It is estimated that each year around 44 000 tonnes of lead is dispersed into the EU environment from these uses: 57 % from sports shooting, 32 % from hunting and 11 % from fishing activities.

The Agency collected information to support its investigation through a call for evidence, which ran from October to December 2019. ECHA submitted the proposal on 15 January 2021. A six-month consultation was held from 24 March until 24 September 2021. ECHA received 319 comments from individual people and organisations.

In simple terms, the proposed restriction is the following:

The restriction proposal does not cover military or other non-civilian uses of lead ammunition, such as use by police and customs forces. Indoor uses are also excluded.

Additionally, the proposed restriction would protect the children of households that very frequently eat game meat. It is assumed that banning large-calibre bullets and lead gunshot could avoid IQ loss in about 7 000 children per year.

The total costs of the restriction is estimated to be in the order of EUR 12 billion over 20 years following the entry into force. The cost to society of avoiding the release of one kilogram of lead to the environment ranges between EUR 1 and EUR 525 for the different uses assessed.

ECHA’s Committee for Risk Assessment (RAC) adopted its opinion on the restriction proposal in May 2022. It supported the proposal while recommending a shorter transition time to phase out lead gunshot for hunting. You can read more about RAC's opinion here.

The draft opinion of the Committee for Socio-Economic Analysis (SEAC) was agreed on 2 June. This opinion is subject to a further 60-day consultation, starting on 29 June 2022.

SEAC is expected to adopt its final opinion in December 2022. The combined opinions of both committees will be sent to the European Commission at the start of 2023.

Once the scientific evaluation of the proposal is done, the Commission is expected to prepare its legislative proposal following ECHA’s report and the committees’ combined opinion. The Commission’s proposal to amend the list of substances restricted under Annex XVII to REACH will be submitted to a vote by the EU Member States in the REACH Committee. Before any restriction can be adopted, it is scrutinised by the European Parliament and the Council.

Lead is toxic to people and wildlife.

Only a very small proportion of lead gunshot fired will hit its target. The remainder of this ‘spent’ lead gunshot spreads into the environment where it can be ingested by birds that mistake it for food or for small stones that they eat to help them grind food in their gizzards. Ingestion of spent lead gunshot is well known in many species of waterbirds, for example, ducks, geese and swans. Lead fishing tackle is also frequently lost during use and affects birds in the same way as lead gunshot and bullets, if ingested. In addition, some contemporary fishing practices encourage the deliberate release of lead sinkers to water (called ‘dropping the lead’).

After ingestion, lead gunshot, sinker or lure is rapidly ground down into small particles, which speeds up the absorption of lead in the birds’ bloodstream. In some cases, this can result in death or in sublethal effects. Ingestion of a single lead gunshot is enough to kill a small waterbird. This route of exposure is called primary poisoning.

In addition, scavenging or predatory animals (including birds) inadvertently eat fragments of lead that are in the tissues of their food. This includes cases where lead fragments are present in the discarded internal organs of large game left behind by hunters after ‘field dressing’, or where predatory animals eat other animals wounded by lead ammunition or those shot for pest control. This is called secondary poisoning and is also known to frequently cause lead poisoning in wildlife.

Furthermore, spent lead projectiles from sports shooting can contaminate the soil and water in and around the shooting ranges leading to a variety of risks. One example is poisoning of cattle, if the shooting area is used for agriculture.

Exposure to lead is associated with a wide range of negative health effects, including reduced fertility, cardiovascular diseases, developmental effects in babies and children, damage to organs through prolonged or repeated exposure and cancer. Lead is especially harmful to children's neurological development. ECHA estimates that in any given year about one million children are vulnerable to the toxic effects of lead due to game meat consumption.

People are exposed to lead mainly through two routes: inhalation and ingestion. Hunters and sports shooters can breathe in lead fumes and dust while shooting. Hunters and fishers can also inhale toxic fumes if they melt lead to prepare homemade bullets and fishing tackle. Such activity may also put other members of the household at risk.

Exposure to lead through ingestion happens while eating game meat hunted with lead ammunition. Recent research suggests that game hunted with lead ammunition can contain microscopic fragments of lead, which cannot be removed during the preparation of meat. The practice of ‘cutting away’ and discarding meat from around the wound channel, or removing visible lead fragments, is not sufficient to remove all lead. Ingestion may also happen through hand-to-mouth exposure when manipulating lead gunshot, projectiles or fishing sinkers and lures.

Based on the clinical evidence of risks to children and pregnant women, the European Food Safety Authority (EFSA) has recommended that exposure to lead from both dietary and non-dietary sources should be reduced.

Any reduction of lead exposure through food will reduce risks to people’s health, particularly for children and pregnant women. Several food agencies in EU Member States already advise their citizens to eat game hunted with lead in moderation. For example, the French Agency for Food, Environmental and Occupational Health and Safety (ANSES) advises the general public not to eat game killed with lead ammunition more than three times a year and that children and pregnant women should not eat game meat hunted with lead ammunition at all.

There is no evidence that eating fish caught with lead tackle will result in exposure to lead.

Restricting lead-based ammunition is nothing new. Many EU Member States, or regions within Member States, already have bans for certain kinds of ammunition in place. Experience from those countries has shown that hunters and sports shooters have been able to adapt to using alternatives without significant problems in relation to ricochet or safety.

Studies show that the effectiveness of non-lead bullets (in large calibres) is the same as for lead bullets and that ethical hunting can be ensured with lead-free alternatives.

The effectiveness of steel gunshot has improved significantly since its introduction. Field studies have shown that hunters using steel gunshot can achieve the same results as with lead gunshot. The effective shooting distance for modern steel gunshot is consistent with the typical range used for hunting. For some species of larger waterfowl, such as geese, shotguns compatible with ‘high-performance’ steel cartridges might be required.

Research shows that ricochet occurs in both steel and lead gunshot. Experience from Denmark as well as research from Germany indicates that there is no increase in the risk of accidents or injuries from ricochet when using steel gunshot compared to lead.

Current prices for steel and lead gunshot are comparable.

Bismuth or tungsten-based gunshot can also be used as alternatives to lead gunshot. They can be used in any shotgun, including vintage shotguns that may not be suitable for use with steel gunshot.

Non-lead rifle ammunition is available on the European market in a wide range of calibres suitable for most European hunting situations. At least 13 major European companies make non-lead bullets for different rifle calibres.

To summarise, lead-free bullets can be purchased at slightly higher costs, but the price increase is not expected to restrict hunting or sports shooting activities.

Multiple alternatives are also available to lead sinkers and lures, such as those made with tin, tungsten, glass or various alloys.

Will existing shotguns and rifles need to be replaced?

The available evidence, including from major shotgun manufacturers, suggests that standard steel shot can be used in most standard proofed shotguns. Bismuth and tungsten loads can be used in any shotgun.

Information from manufacturers and guidance from hunting associations have shown that hunters who want to switch to large calibre non-lead rifle ammunition do not need to purchase new guns.

Restriction on the use of lead gunshot in wetlands

This EU-wide restriction harmonises the national legislation already in place in various forms in 23 EU Member States and introduces new legislation in four EU Member States. It also implements the international agreement (AEWA) to protect wetland birds in the EU.

It is expected that restricting lead gunshot in wetland areas will protect the environment by significantly reducing lead pollution and will prevent the avoidable death by lead poisoning of around one million waterbirds every year.

The restriction is based on the scientific work of ECHA and its Committees for Risk Assessment and Socio-Economic Analysis. ECHA submitted its proposal (Annex XV dossier) for evaluation in April 2017. In August 2018, the opinions of ECHA’s scientific committees on the proposal were ready and sent to the European Commission.

We interviewed representatives from different organisations during an event organised by ECHA where stakeholders shared their views on a potential restriction on the use of lead in ammunition for hunting and sports shooting.

Planned timetable for restriction proposal for lead in shot in terrains other than wetland, other ammunition and fishing tackle

Lead in outdoor shooting and fishing