Bjorn Hansen is Danish and has been selected by ECHA’s Management Board to become the second elected Executive Director of the European Chemicals Agency (ECHA) in January 2018.

In June 2003, he joined the Chemicals Unit of DG Environment in Brussels where he has been working as a head of unit. From 2007 to 2008, he was seconded to ECHA as the Director of Operations and has been involved in the development of REACH from its very early days.

Before joining DG Environment, he worked as an area coordinator for the existing substances team for over a decade at the European Chemicals Bureau at the Commission's Joint Research Centre in Ispra, Italy.

As part of the appointment procedure, Bjorn will make a statement before the European Parliament and answer questions of its Members.

The contract signature is scheduled for the Management Board meeting of 14-15 December 2017.

The Executive Director is in charge of the management and administration of the Agency, excluding the Board of Appeal and its Registry. He is the legal representative of the European Chemicals Agency and reports to the ECHA's Management Board. 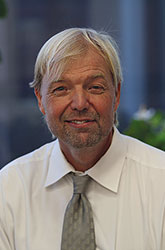 Bjorn Hansen has been selected by the Management Board to become ECHA's new Executive Director.
Route: .live2