Tattoos are a popular form of body art – at least 12 % of Europeans have them. In the 18-35 age group, twice as many are likely to have a tattoo.

The health risks of using dirty needles to inject the inks have been under scrutiny for a long time. Now, their chemical-related concerns have also been analysed and their risks have been regulated at EU level.

To protect European citizens, thousands of hazardous chemicals found in tattoo inks and permanent make-up are restricted in the EU under the REACH Regulation from January 2022.

The restriction covers, for example: chemicals that cause cancer or genetic mutations and chemicals that are toxic to reproduction as well as skin sensitisers and irritants. The aim is not to ban tattooing but to make the colours used in tattoos and permanent make-up safer.

Over 1 000 cases of chronic allergic reactions will be prevented every year as a result of the restriction. Several other skin reactions and serious effects originating from tattoos and permanent make-up will also decrease.

What are tattoo inks and permanent make-up?

Permanent make-up is similar to a tattoo and is used to produce designs that resemble make-up. For instance, it is commonly used to resemble eye liner or to enhance colours in the skin, face, lips and eyelids.

Tattoo inks and permanent make-up are a mix of several chemicals. They may contain hazardous substances that cause skin allergies and other more serious health impacts, such as genetic mutations and cancer.

Ink pigments can also migrate from the skin to different organs, such as the lymph nodes and liver. Sometimes tattoos are removed using a laser that breaks down pigments and other substances into smaller particles. If these include harmful chemicals, the removal process will free them to circulate in the body.

As chemicals used in tattoo inks and permanent make-up may stay in the body for life, there is also the possibility for long-term exposure to the potentially harmful ingredients.

What has the EU done to protect its citizens?

In 2015, the European Commission asked ECHA to assess the health risks of chemicals in tattoo inks and permanent make-up and to examine the need for an EU-wide restriction on their use. ECHA did this assessment together with Norwegian, Italian and Danish authorities. German authorities also contributed to the work.

The investigation covered chemicals known to be used in tattoo inks and permanent make-up that may be hazardous to our health. Special attention was given to chemicals that are carcinogenic, mutagenic and toxic to reproduction (CMRs); sensitisers, irritants and corrosive to the skin; substances that are corrosive or damaging to the eye; metals; and other substances in the Council of Europe’s resolution on requirements and criteria for the safety of tattoos and permanent make-up.

The authorities examined the health risks of these chemicals and investigated the availability of safer alternatives. They also looked at the socio-economic impact of restricting their use, considering its effects on manufacturing and on service sector jobs.

The consolidated opinion of RAC and SEAC was sent to the European Commission in June 2019. RAC looked at the risks of chemicals to people’s health by assessing available scientific evidence on the hazards and risks of the substances included in the proposal. SEAC evaluated the benefits of the proposal to people’s health and the associated costs and other socio-economic impacts.

Both committees agreed that – with a few modifications – the restriction proposal would be the most appropriate means to control the risks of hazardous chemicals in tattoo inks and permanent make-up at EU-level.

RAC also evaluated whether certain pigments or colourants should not be restricted as proposed. It concluded that the risks of cancer and other negative health effects could not be ruled out. RAC noted that information received during the consultation indicated that safer and technically adequate alternatives were currently unavailable for only two colourants – Pigment Blue 15:3 and Pigment Green 7. SEAC considered the socio-economic impacts of restricting these two pigments and recommended that industry is given additional time to identify and switch to suitable safer alternatives.

Both committees agreed that the suggested 12-month transition period would give the necessary time for the concerned actors to adjust their operations.

The restriction was supported by EU Member States in July 2020 and adopted by the Commission in December 2020.

The restriction harmonises the measures on hazardous chemicals used in tattoo inks and permanent make-up at EU level and ensures that all EU citizens are equally protected from them. Before, there was no specific EU-wide legislation in place although some Member States had similar national legislation.

The use of more than 4 000 hazardous chemicals in tattoo inks and permanent make-up will be limited. The restriction introduces maximum concentration limits either for individual or groups of substances used in tattoo inks or permanent make-up. Examples of chemicals are certain azodyes, carcinogenic aromatic amines, polycyclic aromatic hydrocarbons (PAHs), metals and methanol.

The restriction also requires that mixtures meant for tattooing and permanent make-up have this use mentioned on their labels. The label also needs to include a list of ingredients and relevant safety statements.

To guarantee the protection of people also in the long-term, the Commission decided that the restriction will, in the future, automatically limit chemicals that:

1. have an EU-wide classification as: 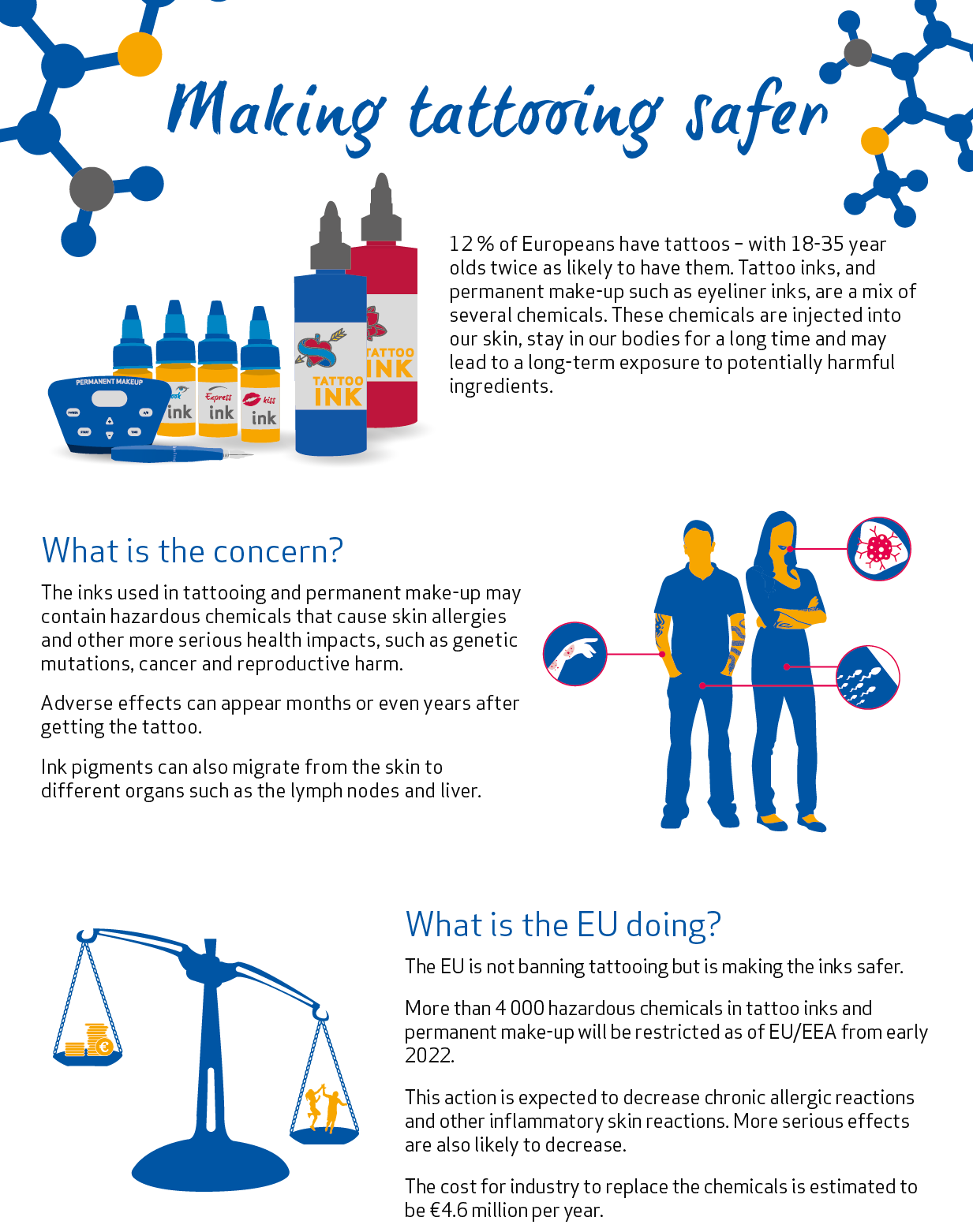