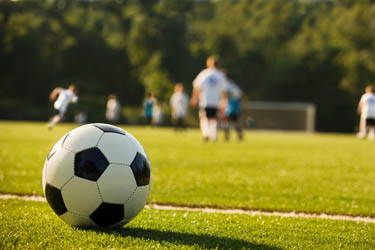 Every day, millions of Europeans play on all-weather sports pitches that use plastic or rubber granules as infill material. The soft infill makes the pitches more durable, weather-proof and adds shock absorption and traction. Playground surfaces also use loose rubber mulches underneath swings, slides and other playground equipment to cushion the ground when a child falls.

The granules and mulches are often made from end-of-life tyres (ELTs) that are broken up and ground into smaller pieces. Their use as infill in synthetic turf has increased in the last 10-15 years due to because the increase on the number of synthetic turfs and also due to the prohibition on landfilling scrap tyres in the EU.

The granules and mulches may contain potentially harmful chemicals including polycyclic aromatic hydrocarbons (PAHs), metals and phthalates. They may also release volatile and semi-volatile organic hydrocarbons (VOCs and SVOCs). The granules also contribute to microplastic pollution as they can be spread to the environment from the pitches, for example, through rainwater or players’ footwear and clothing.

The EU is taking action to improve the environmental footprint of the pitches and to protect its citizens from hazardous chemicals found in the infill material.