Most companies responded to the Agency’s requests and managed to complete their registration data or to join a joint submission as required by REACH. Four registrations were revoked: three for being incomplete and one for breaching the ‘one substance, one registration’ principle.

Helsinki, 29 June 2017 – Since July 2016, ECHA has been carrying out two types of actions to bring existing REACH registrations in line with the legal requirements: reviewing the completeness of existing registrations and making sure that companies who have registered the same substance are in the same joint submission.

ECHA ran two campaigns focused on reviewing the completeness of registrations in its database. The checks were done based on the enhanced completeness check process that applies to all new submissions and updates since June 2016.

Registrants were informed of the missing or incomplete information in their dossiers, and given a deadline by when to provide it. If companies did not update their dossier with the requested information, their registration decision would be revoked.

The first campaign kicked off in July 2016. It focused on cases where the registrants’ justification for not providing the data was that the study was not ready at the time the dossier was submitted. In total, missing information was requested for more than 140 endpoints from 39 registrations covering 24 substances.

Registrants were given two opportunities to complete their dossiers, with the final deadline in April 2017. As a result, the dossiers for 35 registrations were successfully updated, and two registration decisions for one company were revoked. Two registrations for one substance are still pending a final decision.

Later in 2016, ECHA ran a second similar campaign focusing on lead registrant dossiers containing invalid data waivers instead of the required studies or adaptations foreseen by REACH. Four companies with 43 registrations were addressed. One incomplete registration was revoked and for one the final deadline has not yet passed. The rest of the dossiers were updated and completed.

One substance, one registration

The second action is about requesting registrants to comply with their obligation to become part of a joint registration as required by REACH. These registrations were submitted before the Implementing Regulation on joint submission of data and data sharing entered into force in January 2016 and ECHA started enforcing that new registrations are not submitted outside an existing joint submission.

The first companies approached were 118 individual registrants of charcoal. As a result, 81 registrants joined the existing joint submission and 31 filed disputes with ECHA which are still being processed. For five companies the deadline to join the joint submission has not yet passed. The registration decision of one company will be revoked.

Many small and micro-sized charcoal registrants have told ECHA of their difficulties in negotiating access to the joint submission. The Agency will, therefore, analyse this information and previous or current disputes to consider specific measures that could help potential and existing registrants of charcoal to fulfil their registration obligations.

ECHA aims to address all situations where multiple registrations exist for the same substance still this year.

Given the positive results of these two campaigns, ECHA is currently building a strategy to systematically verify the completeness of dossiers that were submitted before the entry into force of the enhanced completeness check. This strategy and its actions aim to ensure a level playing field between registrants who have not updated their dossiers since June 2016 and those who have submitted new registrations or updates afterwards.

If you have already registered and suspect that your dossier could be improved, we encourage you to make use of all the available help and proactively get your registration in order. 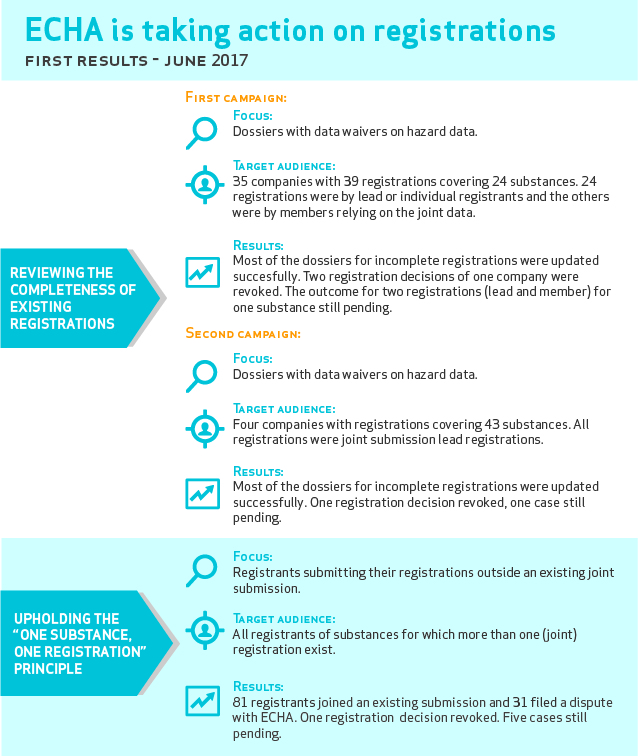